Cancer refers to a collection of diseases in which some of the body’s cells divide uncontrollably and can spread to other parts of the body. Cancers can arise throughout the body but are generally divided into solid (e.g. bowel) or blood-based (e.g. leukaemias). There are more than 200 different types of cancer and 1 in 2 of us will develop one of them during our lifetime. Indeed in 2018 there were 18 million new cases of cancer and 9.6 million cancer-related deaths worldwide. In the UK more than half of new cancer cases arise in the lungs, bowel, breast or prostate (1).

In order to survive, a typical cancer cell develops adaptations that both prevent the immune system from attacking it, while allowing the cancer to grow. These adaptations are called the “hallmarks” of cancer. Two key examples are 1) changes to the DNA, termed mutations, which alter the activity inside a cell which typically makes it more self-sufficient, and 2) a detrimental immune response which not only fails to destroy the tumour but can help it thrive.

The microbiota differs in health and disease

Humans house more bugs in our bodies than our own cells. This ecological community of bugs, comprising bacteria, viruses, fungi and protozoa, together form the so-called “microbiota”. The vast majority of the microorganisms live in our intestines and are not only harmless, but actually help by generating essential nutrients from the food that we eat; this is referred to as a symbiotic relationship.

Technological advances over the last decade have allowed scientists to analyse the unique composition of any one person’s microbiota using a sample of faeces. As well as uncovering the huge diversity in the microbiota between individuals, such studies have repeatedly shown that the microbiota in patients with various diseases differs to that of healthy controls, an observation also made in people with bowel cancer.

Although we increasingly know what microorganisms exist at different levels in patients with bowel cancer, we need to identify whether these differences are merely a coincidence or actively contribute to disease progression. It is hoped that understanding if and how these microorganisms contribute to disease will aid the development of new treatments for bowel cancer that have fewer side effects. Here we discuss some key research publications that suggest that the altered microbiome in bowel cancer doesn’t just associate with with disease, but actually contributes to it.

Specific bacteria can cause cancer-driving mutations

Firstly, there is growing evidence that certain bacteria that are enriched in bowel cancer can cause mutations (changes to the DNA) which allows the cancer to survive in a more autonomous manner. To study how bacteria affect the cells that can form tumours in the gut, a team lead by Hans Clevers isolated cells from the bowel of human volunteers and used them to grow “mini guts” in the laboratory. Injecting these organoids, or mini guts, with the bowel cancer-associated bacterium ‘pks+ E. coli’ caused several mutations that are known to drive bowel cancer (2). This crucial publication therefore provides evidence that a cancer-associated bacterium is not just a bystander, but can drive disease as illustrated by the mechanical drill below.

Secondly, certain bacteria can alter the local immune response to allow the unrestrained growth of tumours. Administering such bacteria to mice lead to an increase in the number of a specific type of immune cell called a ‘myeloid-derived suppressor cell’ which impaired the ability of critical killer immune cells to function (illustrated by the crane). Bowel cancer-associated bacteria ‘Enterotoxigenic Bacteroides fragilis’ (3,4) and ‘Fusobacterium nucleatum’ (5) have both been shown to skew the immune response in this detrimental manner. 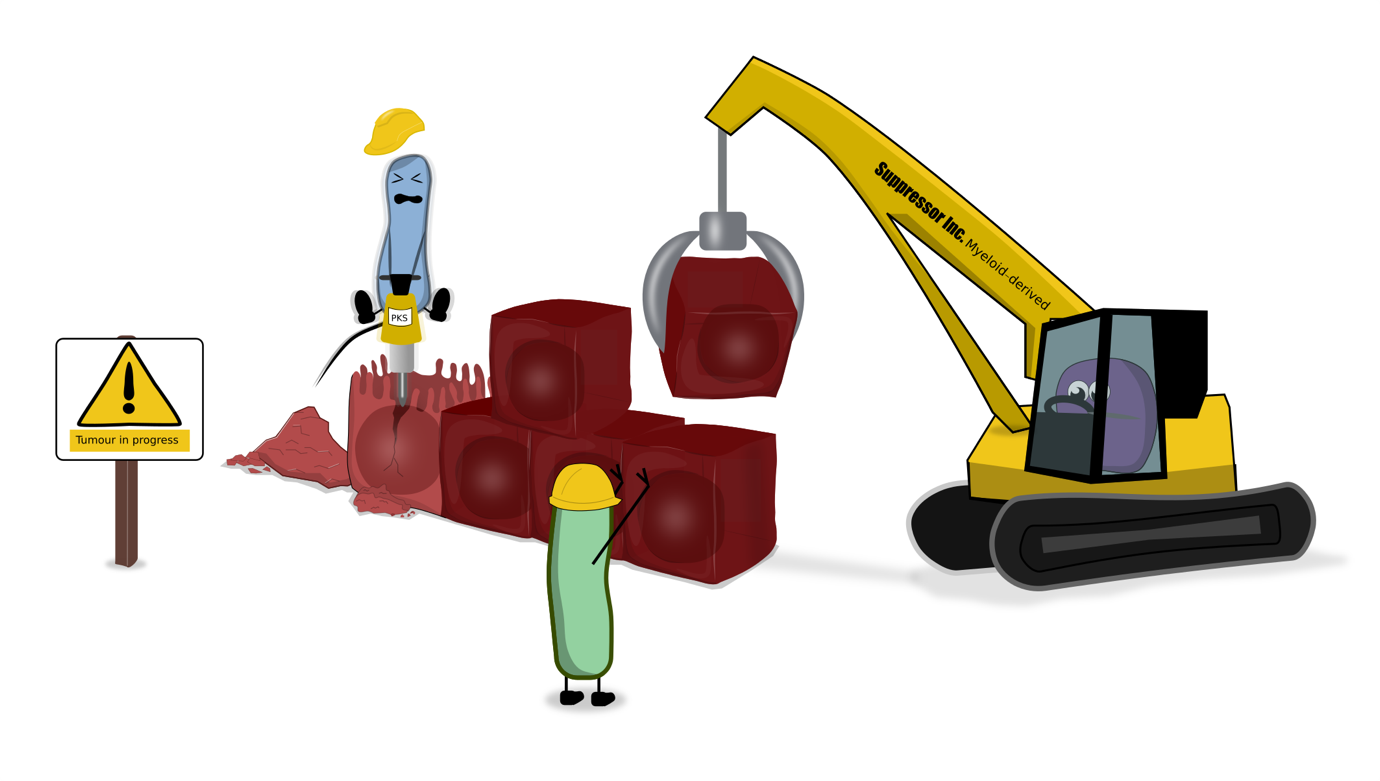 How can we translate research findings to new drugs?

Given emerging evidence that the altered microbiome may be contributing to bowel cancer progression, there is growing interest in developing new drugs to target this. Approaches to do this might include specific anti-biotics to eliminate disease-causing bacteria or administering protective anti-tumour microorganisms via faecal transplantation and oral supplementation.

More research is however first needed to further our understanding of how the microbiota contributes to bowel cancer. This will include analysis of human samples as well as experiments using mice and cutting-edge technologies such as growing even more life-like mini guts in the laboratory.

The Powrie lab and authors

Alina is a final year PhD student and Beth a postdoctoral fellow in Professor Fiona Powrie’s lab at The Kennedy Institute of Rheumatology, University of Oxford. The Powrie lab studies interactions between the host immune system and the microbes in our intestines in health and disease, focussing primarily on inflammatory bowel disease and colorectal cancer. Alina’s research uses a mouse model of colon cancer to study crosstalk between the host and microbes over time, allowing us to learn more about what happens prior to and throughout cancer development. In tandem Beth analyses established tumours removed from patients undergoing surgery to better understand how aspects of the immune response differ and whether we can use this knowledge to better diagnose and/or treat patients.

Welcome to the Oximmuno Blog

How does SARS-COV-2 virus infecting the respiratory system lead to kidney failure, heart attack as well as manifestations in the skin and brain? Studies suggest that sticky blood may be a contributing factor.

Unexpected consequences of COVID-19 in children

What Does an Autoinflammatory Disease Have In Common With COVID-19?