The problem of surviving bowel cancer

A full blood count is a common type of blood test and may play a part in early detection of bowel cancer. The test involves measuring up to 20 individual components from the blood sample taken from a patient. One component measured is haemoglobin, which carries oxygen around the body and may lower due to rectal bleeding, which is a known symptom of bowel cancer. Another is platelets, which help stop bleeding [3].

We are a team of researchers led by Pradeep Virdee and based in NDORMS, a medical department in the University of Oxford. Our goal was to give a complete picture of what we know about this test’s ability to identify people with this cancer. We therefore did a systematic review, which brings together many research papers for projects previously completed by other researchers, of which we identified 53 projects. This includes looking to see if the blood test results were different between healthy people and patients who were diagnosed with bowel cancer. If there were differences present, we also checked to see how early on these differences could be seen to understand the time frame in which they occur and to see if they can help detect bowel cancer at early stages.

After comparing the findings from the 53 previous research projects identified, we found that six of the 20 full blood count components were related to the presence of bowel cancer. We found that patients with bowel cancer had lower levels of three components (red blood cells, haemoglobin, and mean corpuscular volume), and higher levels of another three components (red blood cell distribution width, white blood cell count, and platelets) compared to those who had not been diagnosed with bowel cancer. The remaining 14 components either showed no difference between those who did and did not have bowel cancer or were not assessed by enough studies for us to make any conclusions about them [4]. 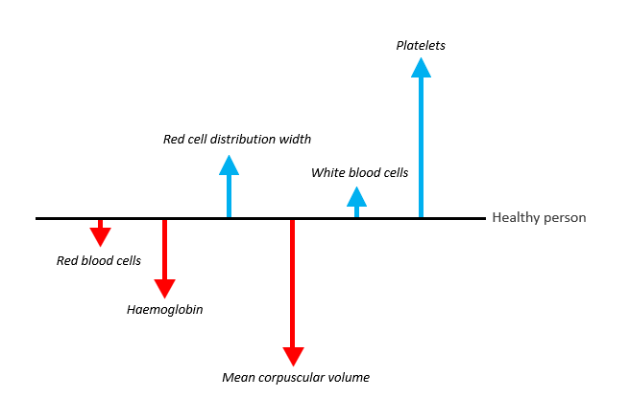 Longer lines represent a larger difference from a healthy person

These differences were largest when the full blood count blood test was performed less than six months before the diagnosis being made. Many of the previous research projects also found smaller differences that appeared much earlier, more than three years before a diagnosis was made, a time where the tumour may be at an early stage. However, these differences are so small that they would not be obvious to a doctor or nurse reading the full blood count blood test results.

How these results will make a difference in the future

We are currently developing a decision aid that will help doctors see how likely a patient is to have bowel cancer. This decision aid will be an electronic tool based on the differences in blood test results that occur early on to help earlier detection of bowel cancer.

This work was funded by the National Institute for Health Research, Doctoral Research Fellowship programme (DRF-2018-11-ST2-057). This report presents independent research and the views expressed are those of the authors and not necessarily those of the NIHR, NHS, or Department of Health and Social Care.

Welcome to the Oximmuno Blog

How does SARS-COV-2 virus infecting the respiratory system lead to kidney failure, heart attack as well as manifestations in the skin and brain? Studies suggest that sticky blood may be a contributing factor.

Unexpected consequences of COVID-19 in children

What Does an Autoinflammatory Disease Have In Common With COVID-19?