How do you explain your research to the public?

... Spend a day at a science festival talking to children! Patricia Logullo talks about her experience at Cheltenham Science Festival.

“Then we must make this treatment better!”, shouted the 7-year-old, at the NDORMS stall at the Cheltenham Science Festival last Thursday (6th June). We had been talking about how doctors choose the best treatment for their patients, and to help illustrate it, we simulated a clinical trial with a simple table-top game. When she realised the most effective option according to the “trial” was not eco-friendly, she decided to run a second round of the trial, but with a simple modification. The original treatment arms? Wooden chopsticks or a plastic spoon to remove beads from a paper cup. The improvement she suggested? Blu Tack to join the chopsticks together, adapted for her small hands (just like she had in a Japanese restaurant).

The curiosity and the creativity of children can run a bit wild in a science festival. Everything seems possible, and everything is so much fun. One might think that it is impossible to explain the methodology of a clinical trial or randomisation to a 7-year-old. It is not: it was simple indeed. The team, supported by Natalie Ford, did that at the Cheltenham Festival: engaged them in performing a clinical trial that tested whether removing beads from a cup using a spoon is more efficient than using chopsticks (SPOILER: yes, it is!), using randomisation with dice and recording the results in a table. We talked to around 400 people during the day in the NDORMS stall at the Festival including school children, their teachers, tourists, university students and researchers, and whole families. I had never had this experience before and found it very rewarding to see the public engage with science and to understand a bit more about how it is done.

“I would recommend it, and I’ll be looking out for similar opportunities.”
- Nicholas Peckham

Surrounded by groups of children and teachers, Nicholas Peckham, a medical statistician, enjoyed having an audience so different from the ones he has in his every day routine at the Botnar Research Centre: “I had a thoroughly enjoyable day! It was a chance to speak about all aspects of trials, from the very basics of what a trial is, with the primary school pupils, to some more complex aspects with teachers, parents and general science enthusiasts”, he said. Nicholas thinks his colleagues should try it some time: “I would recommend it, and I’ll be looking out for similar opportunities.” 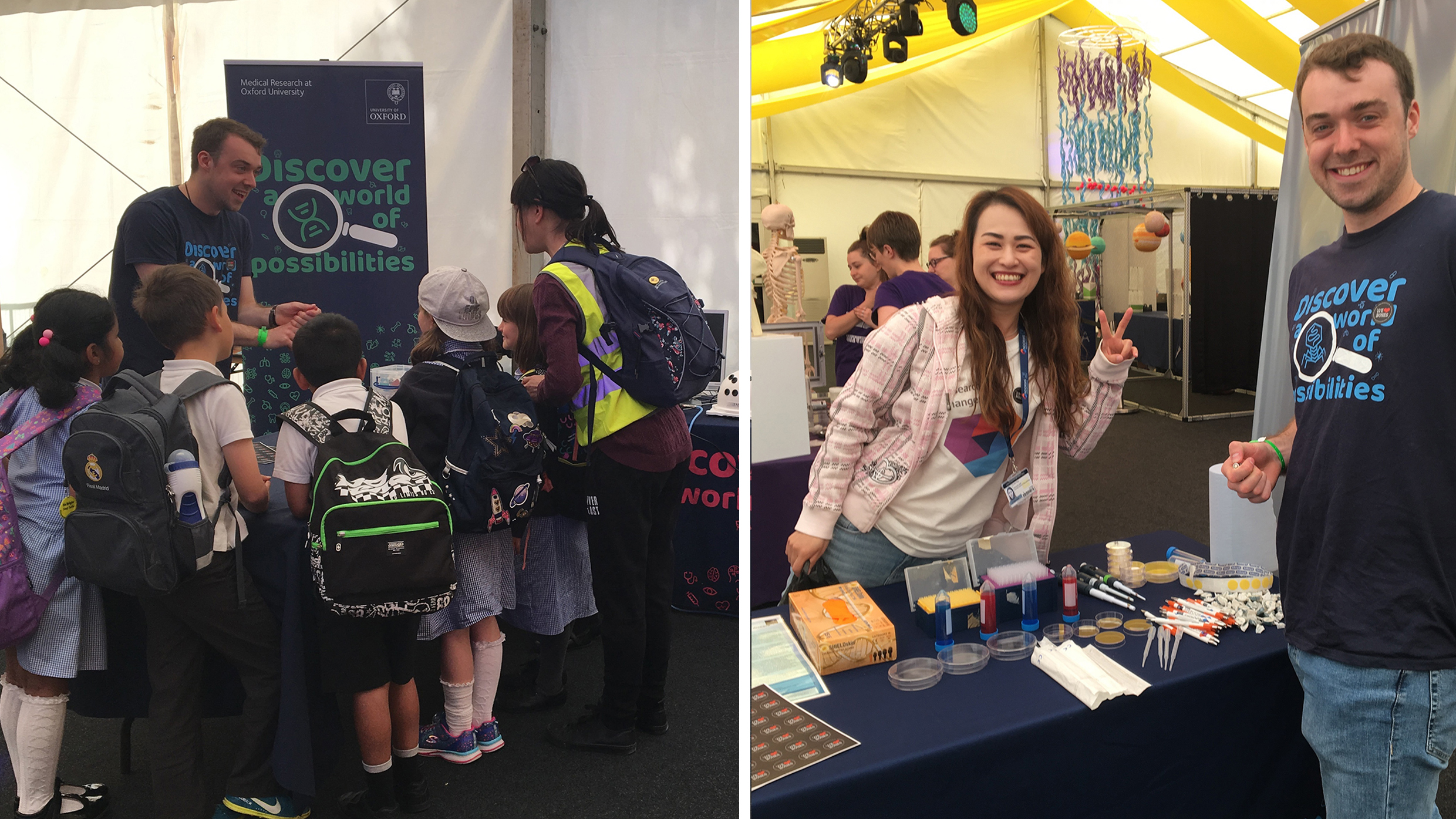 The stall visitors learnt the importance of precision in the lab too: Nan Yang, a researcher on fibrosis and tissue repair, organised a mini lab bench on the stall. Attracted by the intriguing test-tubes of coloured liquids and important looking scientific equipment, we soon had crowds of children queuing up. “I spoke to nearly 200 people on the day. Everyone was very excited about science and enthusiastic to have a go!”, said Nan, who taught children to handle micro-pipettes and to draw smiley faces on a Petri dish using only 0.5 ml of a coloured water. “The festival is a great opportunity to present our scientific research. I had been to a couple of public engagement events in the past, and Cheltenham Science Festival was the most impressive one for sure. I definitely enjoyed it!”

The festival is a great opportunity to present our scientific research.
- Nan Yang

Joining in the fun, was Han Lim, who had brought along a K'nex model that he had built of a CT scanner to help explain his research on making cartilage visible on CT scans.

Our final hands-on activity was a surgical skills training module which quickly attracted the attention of the public. The invitation I made to them was “Do you want to have a go at being a surgeon?”. For the adults, it was usually the first time they had seen the equipment used in keyhole surgery. For the children, it was more like a video game challenge, but they could also see how much training is needed to perform surgery. While they tried to move small beads from pole to pole inside an opaque dome, using the arthroscopic camera and graspers, I could explain how arthroscopic surgery can avoid big scars on your knee as well as talking about the research carried out in NDORMS surgical skills lab on using simulators like the one we had brought along. 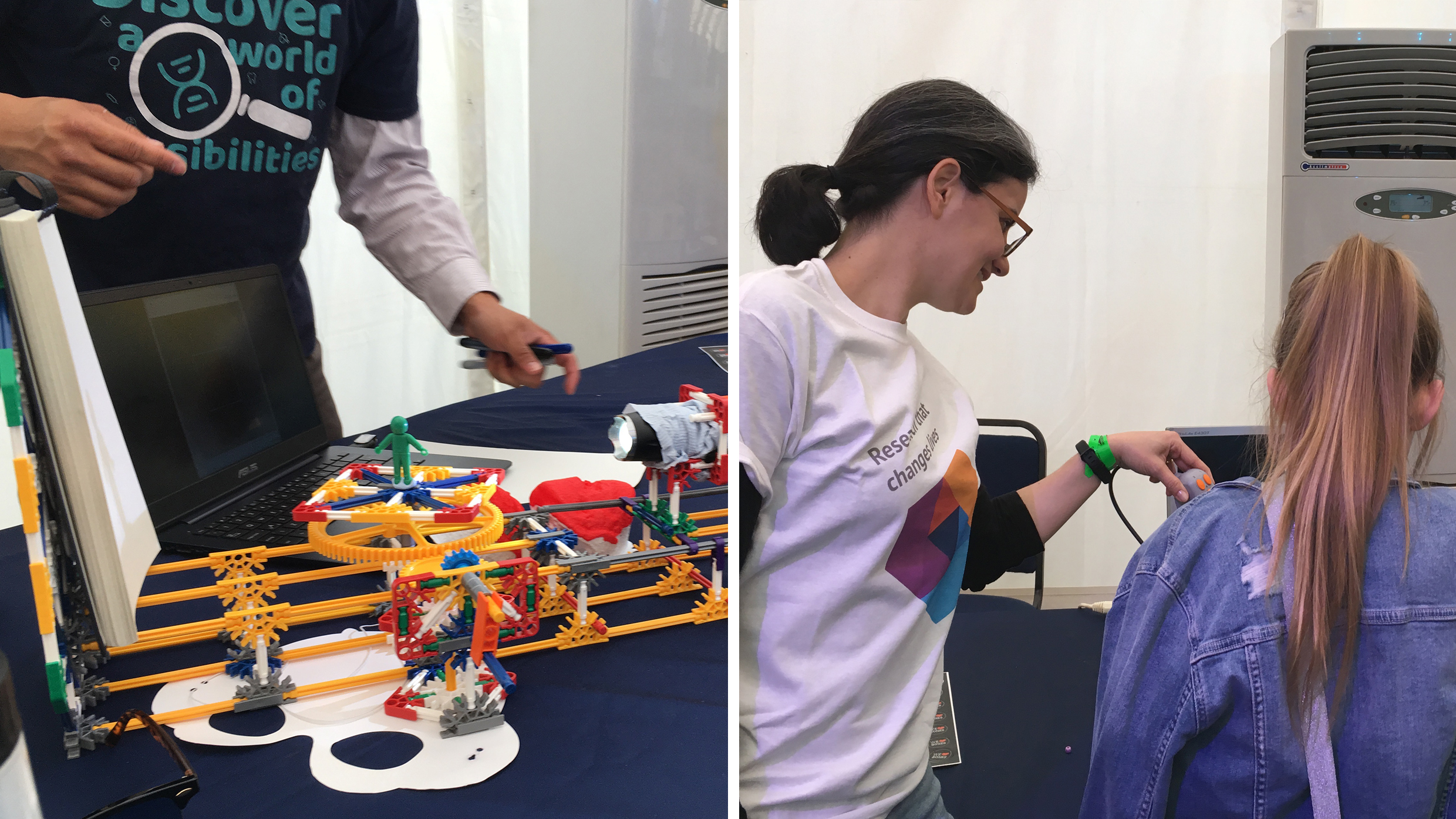 The Cheltenham Festival is a four-day event designed for people of all ages and backgrounds. As many other universities and research institutions also had their stalls around us in the same room, we got visits from students — including medical students, who had their go with the arthroscopy device too — and researchers. They often asked if I was a doctor or a surgeon and got surprised when I said no. I explained to them I worked with the EQUATOR Network, and this was a very nice opportunity to talk about the quality of reporting of the studies they are undertaking and research integrity. So, if I convinced some people to think about using reporting guidelines before starting to write their research reports... mission accomplished!

Friday saw a new group of researchers and despite the near continuous downpour, we were still inundated by enthusiatic children and adults alike.  On Friday, Daniel Howgate took over the surgical skills exhibit, this time adding in a realistic knee model where students had to navigate their way round fake cartilage and bone.  Joining him was Luckshmann Bavan who tested out his new app which, when combined with sensors in specially constructed armbands, allowed a host of willing participants to perform a series of physio exercises and receive feedback on how well they had performed.  Finally Ghada Alsaleh continued Nan Yang's good work showing a host of people how to use micropipettes leaving me to talk about trials with the aid of chopsticks and a spoon.

An enormous thanks to all the researchers who took part over the two days that we were there.  If you are an NDORMS student or staff member who would like to get involved in events in the future, do let me know.

The National Institute for Health and Care Research has awarded an Advanced Fellowship to Dr David Metcalfe to study the diagnosis of the spinal condition, cauda equina syndrome.

Congratulations to Professor Chris Lavy, who has been appointed to the World Health Organization’s (WHO) technical advisory group for integrated clinical care for a period of two years.

Researchers at the University of Oxford have been awarded a grant from the National Institute for Health and Care Research (NIHR) to investigate whether anti-tumour necrosis factor (TNF) therapy can reduce or prevent post operative delirium/cognitive deficit.

A new NDORMS study, published in The Lancet Rheumatology, has found a genetic variant that increases the risk of both carpal tunnel syndrome and trigger finger, and opens the door for new therapies that involve blocking the IGF-1 pathway.

Since 2013 the Kennedy Institute of Rheumatology has been running a Career Development Programme, a scheme to help early career researchers launch their own independent laboratories, and more recently the Innovator Investigator Programme to bring new technologies to core research themes.

Working with researchers across multiple universities, the Oxford Clinical Trials Unit (OCTRU) played a key role in delivering results of the national VROOM trial (Vaccine Response On Off Methotrexate).