Moderate to high intensity exercise does not slow cognitive (mental) impairment in older people with dementia, finds a trial published by The BMJ today.

Although the exercise programme improved physical fitness, it cannot be recommended as a treatment option for cognitive impairment in dementia, say the researchers.

Nearly 47.5 million people worldwide have dementia and the view that exercise might slow cognitive decline has gained widespread popularity. But recent reviews of trials of exercise training in people with dementia have shown conflicting results.

To try and resolve this uncertainty, a team of UK researchers decided to estimate the effect of a moderate to high intensity aerobic and strength exercise training programme on cognitive impairment and other outcomes in people with dementia.

The trial involved 494 people with mild to moderate dementia (average age 77 years) living in the community across 15 regions of England.

General health and fitness was assessed at the start of the study and participants were randomly assigned to either a supervised exercise and support programme (329 patients) or to usual care (165 patients).

The programme consisted of 60-90 minute group sessions in a gym twice a week for four months, plus home exercises for one additional hour each week with ongoing support.

The main (primary) outcome was an Alzheimer's disease assessment score (ADAS-cog) at 12 months. Other (secondary) outcomes included activities of daily living, number of falls, and quality of life.

Compliance with exercise was good and participants were assessed again at six and 12 months.

After taking account of potentially influential factors, the researchers found that cognitive impairment declined over the 12-month follow-up in both groups.

The exercise group showed improved physical fitness in the short term, but higher ADAS-cog scores at 12 months (25.2 v 23.8) compared with the usual care group, indicating worse cognitive impairment. However, the average difference was small and clinical relevance was uncertain.

No differences were found in secondary outcomes, including number of falls and quality of life, or after further analyses to test the strength of the results.

The researchers point to some trial limitations. For example, participants and carers knew which group they were in, and the period of structured exercise may have been too short to produce positive benefits. However, strengths over previous trials included a substantially larger sample size and high levels of follow-up.

"This trial suggests that people with mild to moderate dementia can engage and comply with moderate to high intensity aerobic and strengthening exercise and improve physical fitness," say the authors.

"These benefits do not, however, translate into improvements in cognitive impairment, activities in daily living, behaviour, or health related quality of life," they add.

They suggest that future trials should explore other forms of exercise, and that investigators "should consider the possibility that some types of exercise intervention might worsen cognitive impairment." 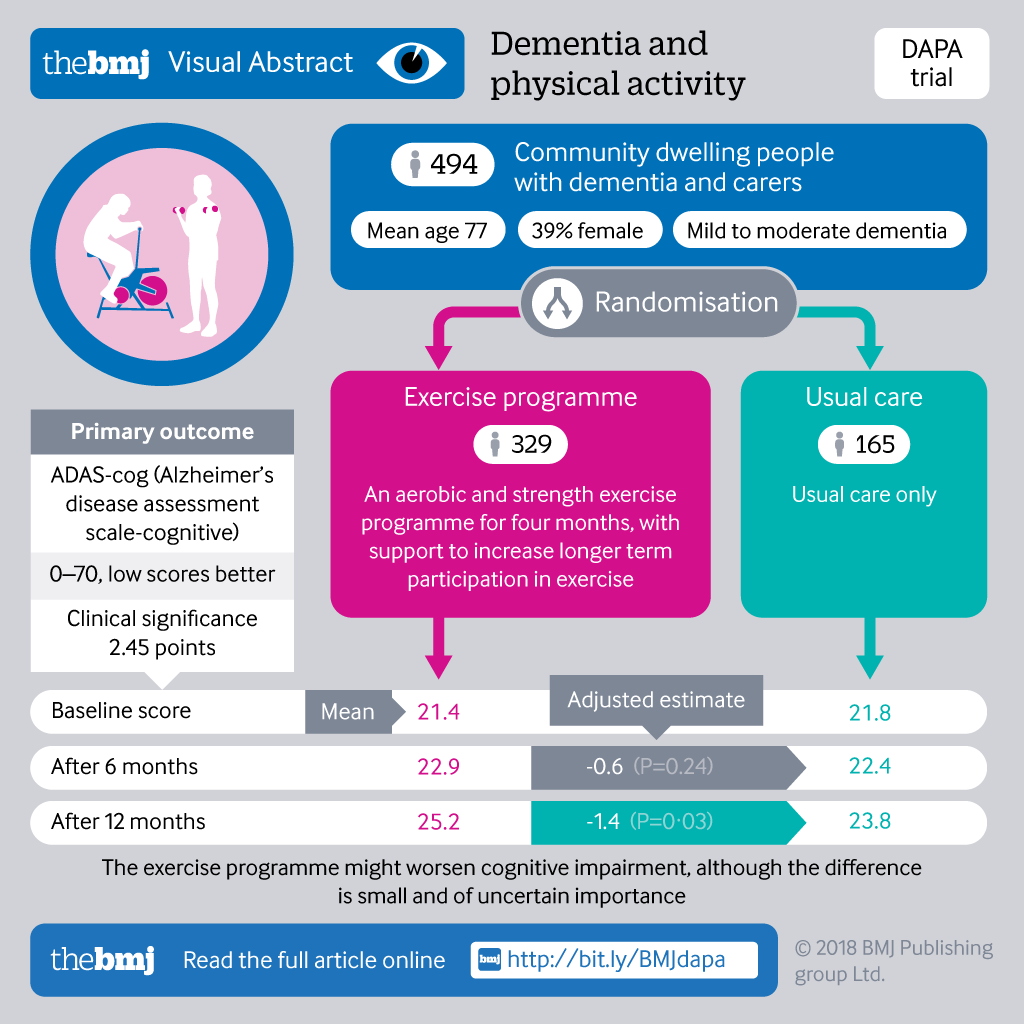 To mark Clinical Trials Day we take a look at some of the recent developments at NDORMS and celebrate the teams that make this important area of our research programme possible.