In this project we aim to understand the differential role of chromatin modifications in various tumor types with a focus on primary bone malignancies, such as Ewing sarcoma and osteosarcoma, as well as multiple myeloma, a haematological malignancy associated with bone destruction.

We will assess how histone methylation and other modification systems contribute to the proliferative and invasive properties of these aggressive cancers. As a foundation for this work, and as part of the Epigenetic Probe Project with the Structural Genomics Consortium we and our pharmaceutical collaborators have developed a number of small molecule and genetic probes with the goal of dissecting the individual contributions of specific chromatin modifying enzymes and binding proteins within the complex epigenetic landscape. We will use tools to assess the effect of chromatin marks on cancer biology.

It is increasingly recognised that epigenetic mechanisms play an important role in the pathogenesis of cancer. The paradigm that mutations in DNA cause either a loss of function in tumour suppressor genes or a gain of function in oncogenes is too simplistic. Inappropriate epigenetic silencing or overexpression of non-mutated genes can both drive the development of cancer and help sustain cancerous cells by avoiding regulated cell death through apoptosis. In addition, multiple genetic studies in various cancer types reveal that mutations and altered expression patterns in readers, writers and erasers of a "histone code", are of fundamental importance in organizing cell-specific chromatin structures and gene expression patterns. For example, the involvement of the H3K27methyl and acetyl epigenetic marks in oncogenic pathways suggests that specific modulation of the histone methyltransferases, demethylases and deacetylases involved has therapeutic utility in a range of cancers.

The figure above shows an example for the initial step to profile compounds for an anti-proliferative effect using two molecules (GSK-J4, a H3K27 and H3K4 demethylase inhibitor) as well as GSK-J5 (its inactive regioisomer) as control. 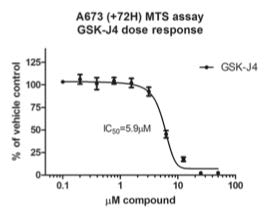 Figure: Heatmap of highly regulated genes in a range of cell lines upon treatment with an epigenetic inhibitor.

Figure: Example of NGS analysis showing expression of RNA and H3K4me3 peaks around the transcription start site of beta actin

Once epigenetic targets have been established in our cell line based systems, it is important to verify that these finding translate to primary tumor samples. We utilise lead compound "hits" to establish if anti-proliferative responses are replicated in primary tumor samples from patients. Being based on the same site as the Nuffield Orthopaedic Centre (noc.php), a leading centre of bone oncology, and working in collaboration with our partners at other cancer centres such as the Royal Marsden Hospital in London, we have access to tumour samples and use this patient material to investigate phenotypic responses to epigenetic inhibitors.