My name is Teya and I am a business administration (Oxford University) apprentice working as a Clinical Trial Support Officer in SITU. I was lucky enough to be selected to attend an apprentice trip to Brussels organised by the MEP of South East England, Judith Bunting and her wonderful team to visit the European Parliament. We got the opportunity to meet and learn about life as an MEP, acquire knowledge about the Erasmus+ scheme and attend a small tour of the EU Parliament building including the HemiCycle. In addition to this, all apprentices were invited to attend a formal drinks reception where MEPs performed inspirational speeches and spoke about the how apprenticeships have expanded to the Erasmus+ scheme.

On the 15th October 2019, all of the apprentices got to know one another when travelling to Brussels on the Eurostar. The group leaders of the trip did a great job at seating us on the train with apprentices from our hub as there were roughly 45 apprentices from across the UK attending this trip (I was part of the Oxford Hub).

Upon arrival to Brussels, we all chatted further about what we studied and what our roles are as an apprentice whilst we travelled to check into our hostel. From here, we all made our way to the European Parliament for a formal drinks reception. Four members of the European Parliament spoke to all of the apprentices in the audience about Renew Europe and how the Erasmus+ scheme now supports apprentices, informing us of what an incredible opportunity it is for young people to experience working in different EU states, learn new languages, working with people from different cultures and backgrounds and professionally develop their skills using the scheme. They are hoping that the UK will still be involved in this advantageous scheme even after Brexit. The key theme of each speech was that “Brexit is not inevitable.”

As someone who has never heard of these types of opportunities to work abroad before, being able to listen to the different roles that are available was fascinating and definitely something I would love to consider in the future.

The highlight of the evening for me was that each spokes-person conversed with the groups of apprentices about what their current role was, the path to their success, life experiences and encouraging words whilst simultaneously asking us what we were studying as apprentices and where we see ourselves in the future. Many of the MEPs offered inspiring words and advice on how we can grow our careers. On the 16th October 2019 we started bright and early and went straight to the European Parliament to attend a talk on life as an MEP. The first section explained a bit about the EU Parliament. I learnt that there are 751 MEPs across Europe which all speak 24 different languages and have 7 political groups. They then explained what the EU do which involve ‘exclusive’ (E.G. monetary policy), ‘shared’ (E.G. environment, transport, research) and ‘support’ (E.G. Education, Culture) jobs. They then showed us some Euromyth's which were quite comical and made the whole audience chuckle. They're definitely worth a read!

To conclude the talk, Judith Bunting spoke about her life as an MEP which involves attending numerous meetings, debates and committee group talks, writing reports, discussing current issues, debating these and finding a solution/ how they can be improved - often a vote will be called for to receive an equal solution that everyone agrees on. A big topic which they have recently been discussing at the moment is wildlife trafficking. She also spoke about her work and involvement with the Erasmus+ and Erasmus Pro Programmes, how they budget for different programmes and the effects of Brexit. Additional points that I noticed Judith mentioning during her speech were what skills may be required to be an MEP which included: 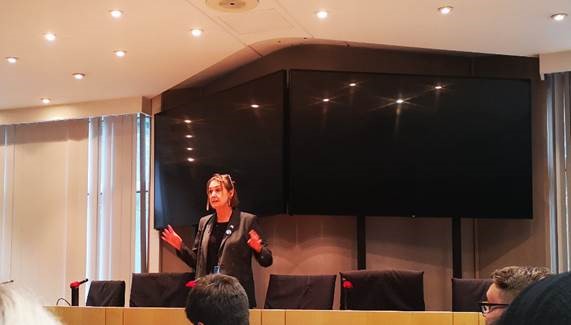 It was a brilliant opportunity to be able to meet Judith Bunting as she was the organiser of the trip. She was very welcoming to all of the apprentices and she was up for taking lots of pictures with the group.

After the talk on life as an MEP, all of the apprentices were taken on a little tour of the European Parliament and viewed the Hemicycle. We were given some information and the opportunity to ask any questions that anyone may have had. 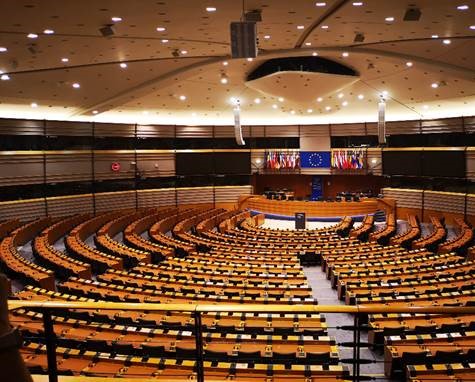 After a brilliant, inspirational and informative few days, everyone was given some free time to explore Brussels, do some site-seeing and indulge in the culture. The architecture in Brussels is so beautiful and we brought lots of Belgium chocolate which was very yummy! This apprentice trip to Brussels was overall an inspiring and brilliant opportunity which I feel so lucky to have been selected to attend. I felt that I learnt a lot about political programmes (Erasmus) and the opportunities it has for young people all across Europe and also the role of an MEP, mainly understanding what their job entitles. Being able to have the chance to meet some of the MEPs and speak to them about their job and apprenticeships was an enlightening experience and also gave me the chance to reflect on what an amazing opportunity being an apprentice is.

I equally enjoyed being able to network with other apprentices across the UK and discover all the different types of apprenticeships that may be available for people. Everyone was so welcoming and friendly which really made the trip!