Even though effective treatments can substantially reduce the risk of breaking another bone, less than 25% of patients receive effective preventative management after a broken bone.

The aim of these workpackages are to close this clinical care gap through disseminating good practice and improving the evidence base in secondary fracture prevention.

We aim to provide a platform to spread good practice in secondary fracture prevention so every patient aged 50 and over with a fragility fracture in South Central is systematically identified, investigated and receives effective management of both bone health and falls prevention for at least five years.

The Fracture Free study aims to extend our understanding of the causes and consequences of fragility fracture and compare aspects of secondary fracture prevention across the UK.

Findings from this study will be used to inform local and national fracture prevention services to achieve the National Osteoporosis Society's goal of a fracture free future. 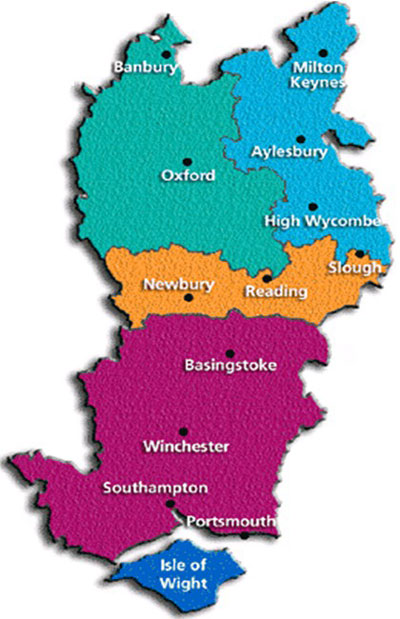 Image: Map of our area.

Osteoporosis and fragility fractures are potentially devastating and remain underestimated by both the public and clinicians.

The Department of Health (DoH) Falls and Fragility Fracture Strategy suggests a step down pyramid of cost effective strategies (4). Efficient management of the hip fracture patient is the first tier followed by case finding for secondary prevention in primary and secondary care as the second tier before strategies for primary prevention in the at high risk group.

Despite the DoH recommendation of secondary prevention of fragility fracture as a cost effective model of health care, uptake of fracture liaison services (FLS) is low in England primarily because the economic modelling is not based on UK trial data but extrapolated from estimated therapeutic benefit from existing FLSs (5).

For a secondary prevention service to be effective, it must capture as many patients as possible who are at risk of refracture (6) as well as ensure prescribed therapies are adhered to with a medication possession ratio of at least 80% (7).

There is consistent pharmaco-epidemiological evidence demonstrating unacceptable continuation of osteoporotic therapies at 6 months, with rate of 50% (2). The poor persistence is associated with an increased risk of fracture (7).

Further, even though up to 20% of patients presenting from a hip fracture are from care homes, these patients often do not receive bone protection due to clinical concerns regarding risks and benefits in terms of their frailty and cognitive impairment. In addition, most of our understanding of the causes and consequences of fragility fracture are from non-NHS health care systems.

We are a network of every bone clinician / practitioner in the South Central Region led by: